The Advantages of Investing over the Longer Term

I have recently been following an interesting blogger from America who looks at life from the point of view of a statistician, which gives me a more mathematical take on the world (and is surprisingly fascinating). One of his latest blogs concerns the advantages to be gained from long-term investing and, whilst it focuses just on the Standard and Poors 500 index from the US, the history and principles can be applied to most worldwide investment markets.

In the field of statistics there is a concept known as “the signal and the noise”. The signal is the underlying truth behind some process. The noise is just random error that makes it hard to see the true signal.

Think of an assembly line. Pretend five people show up every day to work. These five people can produce five widgets each day. As long as the five people show up like they’re supposed to, five widgets will be produced each day. This is the signal. But on some days, one person might call off work, so only four people show up to work. On these days, only four widgets are made. Perhaps on another day an extra person shows up who mistakenly thought they worked that day. On those days, there are six people working so they end up producing six widgets. Or maybe one day the machine used to make the widgets breaks, so they end up producing zero widgets. Exactly five widgets are supposed to be produced each day. That’s the signal. But in reality, sometimes more or less are produced on a given day. That’s the noise.

The Signal & the Noise of the Stock Market

In the stock market, this same phenomenon exists. The signal is the trend in the market, while the noise is just random behaviour that distorts this trend.

The hardest part about investing in the stock market is being able to deal with this noise. It’s exhilarating when the price of the stock market rises quickly, but it’s terrifying when it crashes. This is why most people buy and sell stock sporadically, because of their emotional reaction to the short-term behaviour of the market.

What if there was no noise?

Here’s an interesting thought experiment: what if there was no noise in the stock market? What if there were no rapid increases in the price of the market and also no major crashes?

There has been an impressive climb in the S&P 500 from 1996 to now, but it wasn’t a smooth ride by any means. The signal is pretty clear here: a steady upward trend. But there is plenty of noise thrown in here as well, notably the crashes in 2000 and 2008. Despite the drops, the S&P 500 averaged roughly a 7.6% annual return during this time period. This is the signal.

Here’s what the S&P 500 would have looked like the past 20 years if there was only the signal, without the noise: 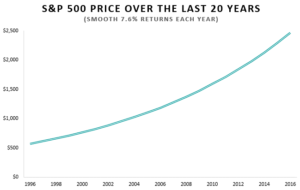 This chart is much smoother than the first. If this is what the S&P 500 would have looked like over the past 20 years, it would have been easy to remain invested.

If we combine these two charts, we see that that they both have the same ending value in 2016, but they took wildly different paths to reach that ending value. 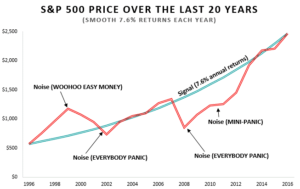 The signal of the market has been there all along. But it has been masked by the noise over the last 20 years. In the late 90’s, everyone and their cousin was buying stock because of the Dot Com Boom. In 2008, everyone thought the world was going to hell and sold out of all their stock.

This noise distorted the true reality of the what was actually taking place in the world over these 20 years: new technology and new businesses were making our quality of life better than ever before. The stock market reacted accordingly, by rising 7.6% annually. But because of all the noise, it was a wild time to be an investor and no easy task to remain invested.

Is Another Market Crash Coming?

At some point in the future there will be another market crash. But I have no clue if it will be next week, next year, or even in the next five years. When it does come, I have no idea if it will be a mild correction or a massive crash, and nobody else in the world knows either. But whether or not another crash comes, I’m confident that in the long run the market will continue to rise.

I might be a perpetual optimist, but I believe humanity will continue to invent new technology, expand commerce, and find new and better ways to make the world a prosperous place to live. All of this translates to higher quality of life and higher valuations on the stock market. I think the signal of the market will continue to be positive and investors who are willing to take the ride will see their investments continue to grow over time.

We use cookies to ensure that we give you the best experience on our website. If you continue to use this site we will assume that you are happy with it.AcceptRead more